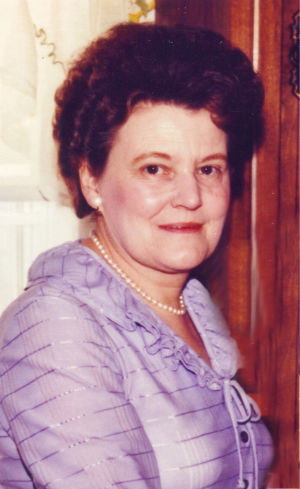 Dorothy Marie Hutson (nee Pinnell) of Steelville, MO, was born on October 7, 1927 to James Lloyd and Grace Clementine (Coleman) Pinnell. She passed away on Friday, December 6, 2019, at Steelville Living Center at the age of 92 years, 1 month and 29 days.

As a child, Dorothy loved playing with her brother and three sisters on their family farm. She grew up in a loving Christian home and accepted Christ as her Savior as a young adult.  After graduating from Steelville High School in 1945, Dorothy moved to Saint Louis to work as a bookkeeper at Edison Brothers Shoe Co. She loved her single years working in St. Louis, living near Tower Grove Park, and having fun with her sister, brother and friends. In 1952, she decided to move back to Steelville to work as a bookkeeper for Earl’s Chevrolet. That May, a teacher (who sold cars in the summer) stole her heart with his dark wavy hair, dimpled smile and constant teasing in the office. Delmar Hutson closed his best deal September 8, 1952, when Dorothy said “I do” to what ended up being nearly 62 years of marriage.  Together, they were the proud parents of Spencer and Paul.

In November of 1952, the newlyweds bought a shoe store in downtown Steelville. They expanded their business to include clothes for all ages, fabric, sewing notions and tuxedo rentals, and Dorothy’s love for people, eye for style and savvy business-sense made Hutson Department Store a success for 36 years. In addition to managing the store, Dorothy served as a faithful pastor’s wife, as Delmar served as pastor at Cross Roads Baptist Church in Leasburg for 14 years and Center Point Baptist Church in Steelville for 30 years. She taught Sunday School and served as church organist the majority of their marriage.

After closing the department store, Dorothy and Delmar started Hutson Funeral Home in Steelville and Cuba with their sons in 1989.  Dorothy managed the books up into her 80’s, and could be seen every day in the office greeting families with a smile and a comforting word until the last couple months of her life.

Dorothy was an amazing seamstress and bargain shopper, but her best life work was her job as “Mom” to Spencer and Paul, and “Gram” to Brooke, Brett, Rheanne, Kayla and Paula. She delighted in her children, grandchildren and later, great grandchildren.  She always let them know how much she loved them and that she “kept them in her prayers.”

Arrangements under the care of Hutson Funeral Home, Steelville, MO.

To send flowers to the family or plant a tree in memory of Dorothy Marie (Pinnell) Hutson, please visit our floral store.