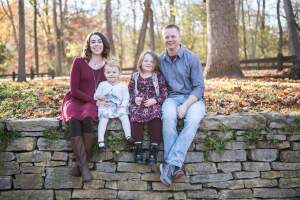 James grew up in Steelville, MO where he attended school until his junior year of high school.  At the age of 15, he met the love of his life, Kimberlee Nicole Beezley, who he began dating on September 10, 2005.  James and Kim were inseparable and became a unit, you couldn’t say one’s name without automatically saying the other.  James moved to Owensville in 2007, graduated high school, and enlisted with the Marines.  James was going to have to go to California, so he and Kim had a small wedding ceremony in Cuba, MO at his cousin, Pastor Matt Cook’s living room, on December 22, 2008.  They later had their large formal wedding at Center Point Baptist Church in Steelville, MO on July 11, 2009 and with this love story, 2 beautiful daughters, Zoey and Lydia, were born.

James served his country honorably as a Sergeant with the United States Marines for eight years.  He was in the 1st MSOB (Marine Special Operation Battalion) for his first four years.  He was deployed with the Special Operation Task Force.  He deployed to Afghanistan in 2009 and returned in 2010.  He deployed on the 15th MEU aboard the Essex and the Anchorage.  He was deployed on the Anchorage from May 2015 and returned a few days before Christmas.  He served with the 3rd LAAD (Low Altitude Air Defense) during his last four years.  During his time in the Marines he had visited Afghanistan, Africa, Japan, Germany and Hawaii.  His dedication and love for his country came with sacrifices, he lost many friends and missed memorable moments of his daughters as infants.

He accepted the Lord as his personal Savior at an early age and was a member of Sullivan Christian Church where he also offered a lot of his time when he wasn’t at work.  He and Kim worked with children, youth and helped with Growth Groups.  James was adventurous and was always looking to try new things, whether it was a career path or hobby.  He had gone to school to become a dog trainer, attended vet school at Mizzou, had a certificate as a heavy equipment operator, wanted to do standup comedy and recently wanted to become a pilot.  James was a supervisor while working at G4S as a Security Guard and was attending Liberty University studying Pre-Law and was set to graduate this coming July.  He was going to focus on helping veterans get what they deserve.  He had been very active with a non-profit organization for veterans called Mission Force.  James had a heart for helping people and was quick to make a friend.  While working at the Metrolink, Kim kept noticing small transactions coming out of their bank account; she questioned him, he said he was buying tickets for people who needed help.  James was so talented, a jack of all trades and a master “hobby changer”.  He whatever he did, he worked at it 110%.  He enjoyed woodworking and made their kitchen table and various things around their house.  He was an artist; he painted murals on his daughter’s walls, was always the one to tackle art projects, Valentine’s Day boxes and wrap the Christmas presents (because Kim didn’t do it to his standards).  He liked to decorate the house, put outfits together and shop for Kim. James was a go-getter and wasn’t afraid to do anything.   He would light up any room he was in.  He was always smiling and playing practical jokes on people. He could retain an enormous amount of information and was quick to tell random annoying facts to his family and friends.  He loved to play XBOX Live and was Kim’s biggest child. He loved the outdoors; he enjoyed doing yardwork, fishing, and hunting and looked forward to taking Lydia this coming youth season.  He had been working on his boat, re-upholstering the seats and was always reading on things to do. The list could keep going, this just shows a glimpse of how passionate of an individual he was.  To know James, was to love James.  Most of all, he enjoyed spending time with his family.  Kim, Zoey and Lydia were his world.  He was an amazing husband, father, son, brother and friend.

He was preceded in death by his grandparents-in-law William “Bill” Moreland, Joel and Evelyn Beezley; great grandparents Emma Jane and Raney Lunsford; Lorene and Bill Davis.

Visitation was from 4:00 PM - 8:00 PM on Monday, February 8, 2021 at Hutson Funeral Home, Steelville, MO. Funeral Service was on Tuesday, February 9, 2021 at Sullivan Christian Church at 11:00 AM with Pastor John Blackmore officiating. Burial was at Jefferson Barracks National Cemetery in St. Louis, MO with full military honors.  Memorials were suggested to help support the family.

Arrangements under the direction of Hutson Funeral Home, Steelville, MO.

To send flowers to the family or plant a tree in memory of James A. Cook, please visit our floral store.