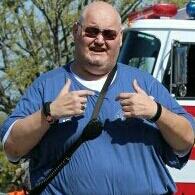 Michael Joseph “Tiny” Keen of Steelville, MO was born on Thursday, August 28, 1969 in Bonne Terre, MO to Larry Joseph Keen and Mary Lou (Sansoucie) Keen.  He passed away at Missouri Baptist Hospital in St. Louis, MO on Thursday, November 26, 2020 at the age of 51 years, 2 months and 29 days.

Tiny grew up in Bonne Terre, MO until he and his family moved to Viburnum, MO while he was in high school and graduated with the class of 1987.  After graduating high school he went to the Nashville Auto-Diesel College where he received his education to be an autobody technician.  He then went to work with Bob Brown in Rolla, MO until he decided that career wasn’t the right fit for him, and went to school for his life calling where he got his license to become an EMT and paramedic.  On April 9, 1994 he married Jamie Sue Williams at the 1st Baptist Church in Viburnum, MO and to this union a daughter, Melissa, was born.  Tiny was a police officer in Viburnum and also ran the ambulance department there.  He then moved to Steelville, MO where he worked on the Steelville Fire Department for 25 years where he served as an assistant chief and retired as a medical officer.  Tiny always served the public in an emergency assistance capacity.  He worked for Rolla, St. James, Viburnum, Steelville & North Crawford ambulances and was on the 911 board of directors. He served as the Mayor of Steelville for 4 years. Tiny also collected toy emergency vehicles.  He was baptized at the 2nd Baptist Church of East Bonne Terre in 1977 and rededicated his life in 1997.  Those that knew Tiny, knew he loved cologne and to smell good.  He enjoyed NASCAR, going to PDRA races with Moose and delivering trailers.  Surprisingly, he liked to golf and he enjoyed to shoot guns. He loved to sing karaoke with his dad and country music, especially the old stuff. Most of all, Tiny loved his family, especially his favorite “Sis” Melissa; was crazy about his daughter Melissa “Sissy”, granddaughter London and he loved his EMS family.

He was preceded in death by his parents Larry Keen and Mary Lou Williams; grandparents; aunts and uncles.

Visitation was from 4:00 PM to 7:00 PM on Wednesday, December 2, 2020 at Hutson Funeral Home, Steelville, MO.  Funeral Service immediately followed with Michael Abbott and Rev. Jerry Beers officiating.  The service was live-streamed on Hutson Funeral Home in Steelville's Facebook Page. The family chose cremation as his final disposition.  Memorials were suggested to the funeral home to help with final expenses.

Arrangements are under the direction of Hutson Funeral Home, Steelville, MO.

To send flowers to the family or plant a tree in memory of Michael “Tiny” J. Keen, please visit our floral store.